Showing posts from November, 2011
Show all

You can quote me on that 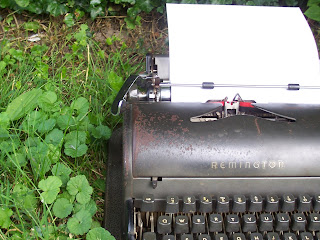 I was one of three poets interviewed by The Coachella Review this fall for their blog. I got to talk about writing and reading; and well, what else is there to talk about?   You can read my interview here . Also interviewed in this series were Peycho Kanev and Joanne Lowery .
2 comments
Read more

A couple weeks ago , I mentioned here that a certain picture looked like a postcard and one that I would be happy to find in my mailbox. Remember that? I do. Anyway, after writing that, I didn't think much of it. Went on with the everyday things. Then one day last week after finishing work and running errands, I come home to find this friendly thing waiting for me in my mailbox:  Sometimes the universe is listening. Sometimes I just have wonderful friends like Annie . She is also a bibliophile and crafter, and a general fan of writing and quiet moments to oneself, or with a friend and a cup of tea. Annie is hoping to start a quiet sort of revolution devoted to writing and sending actual letters and little bits of papery ephemera.  You can certainly count me in.
1 comment
Read more

For Halloween this year, I got a second (and quite unexpected) acceptance letter. I had already resigned myself to being rejected again from this literary magazine, but the emails came in yesterday: my poems "Red Market" and "Women and Children First" have been selected for publication in the next issue of Moon Milk Review ! I was first drawn to Moon Milk Review last fall when I stumbled upon them in a lit mag search. When I learned that their namesake is taken from the writing of Italo Calvino (specifically, his short story "The Distance of the Moon" from Cosmicomics ), I was in love. I first discovered Calvino during my junior year of college with The Castle of Crossed Destinies ; and I was so enamored that he became one of three authors I studied and wrote about for my senior thesis. Even now, whenever I go to a bookstore, I scan the C section for his name. A magazine run by editors with reading tastes as snobby as mine, now that sounds like a pla
2 comments
Read more
More posts