Showing posts from June, 2016
Show all

On still lifes and still writing 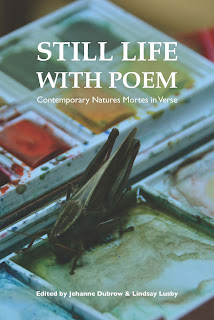 Since my last post (in March! What?!), I've been entirely sucked into my (fantastic but busybusybusy) day job at the Rose O'Neill Literary House. It's been a productive few months professionally, but my writing has stagnated in the meantime. I intend to turn that around again soon, making sure the entire summer doesn't pass before I've written at least 2-3 more Alien  poems.  In news: after months of editing and proofing, we finally received the first printed copies of the Literary House Press's next poetry anthology, Still Life with Poem ! It's just as beautiful as I hoped it would be. This is the second volume I've co-edited with my great friend and colleague Jehanne Dubrow . Sadly, this is going to be the last, at least for now. Jehanne recently accepted an exciting new position that she is looking forward to beginning before the end of the summer. As heartbroken as I am for myself and for the Lit House, I am thrilled for her. I can honestly say
Post a Comment
Read more
More posts