Showing posts from February, 2013
Show all

February 26, 2013
This past week I submitted my "Atomic Age" poems to three more literary magazines. [PANK] Magazine Black Warrior Review The Lumberyard I admire all three of these journals quite a lot.  But The Lumberyard from Typecast Publishing is an especially striking one, with its dedication to edgy modern design through letterpress-printing. As much I like online publications (and I do), as a printer and a reader, there really is something to be said for a beautiful object held in the hand.
Post a Comment
Read more

So far this month, I have submitted poems to the following the literary magazines: Caketrain Third Coast Mid-American Review On a related note, my favorite online resource for discovering and keeping track of new literary magazines (not to mention all of my submissions) for the past few years has been Duotrope . It is honestly the most comprehensive database out there for literary magazines and creative writers and, until January 1, 2013 , it was an absolutely FREE tool. At first, I was a bit more than reluctant to purchase a $50 yearly subscription to this amazing service that I had grown used to taking full advantage of at absolutely no cost to me. So I said my haughty goodbyes and searched around for a new lit mag database resource.  But all the alternatives fell so much shorter than Duotrope. It currently has listings for 4586 fiction, poetry, and nonfiction markets (and counting). And each listing page has comprehensive statistics based on the responses of users like
1 comment
Read more 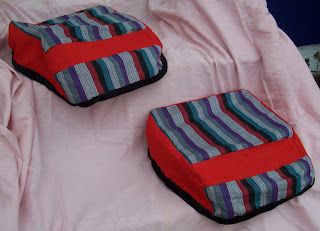 Two more custom typewriter cozies off to Switzerland! These red twins are also set to be matched with Olivetti Valentines.  Just in time for Valentine's Day! Personally, I think these are better than a dozen roses, don't you? They'll last longer anyway.
Post a Comment
Read more

Last week, I received a good bit of poetry news:  My two poems "Foxwife" and "Stepmother" have been accepted for publication in an upcoming issue of Midway Journal !  Both of these poems are deeply rooted in folktale.  "Foxwife," is a folktale parody of Anne Sexton's poem "Housewife."  In "Stepmother," I pull from "Hansel & Gretel," "The Juniper Tree," even a little bit from "The Little Red Hen," with each of the four sections of the poem in the voice of a different character (sister, dead  mother, brother, father).  It is in no way a reference to my  real-life stepmother, who is certainly not wicked (not even close). But I did pull a little from my real-life sibling bond with my younger brother, that I noticed got much stronger after our parents' divorce. An us-against-them bond, "them" being the rest of the world. I wrote "Foxwife" in the old apartment on Goose Hil
Post a Comment
Read more
More posts